ESDEMC is rolling out the new ES650 Robotic Automated Test System. This product can be added to any of ESDEMC’s existing 2-pin test systems, allowing for further automation. Compatible ESDEMC systems include TLP, vf-TLP, HBM, HMM, MM, LVS, EOS, CC-TLP, and more. This is a low-parasitic test structure, and it is possible to mount the current probe close to the DUT for more accurate transient current measurements.

Similar to the ES640 CDM, dimensions of the ES650 can be customized to meet many DUT size requirements. Any number of DUT pins can be tested. The same high-resolution cameras and motion control are offered with the ES650 system as well. Additionally, probe contact detection is used for probe tip protection.

ESDEMC Technology will soon be releasing the ES622 Pulsed IV Curve System. This new system will be the eventual replacement of the ES620 Pulsed IV Curve System. Like the existing ES620, the ES622 provides a convenient means for testing DUTs under various pulse conditions. Transient data, IV curve data, and leakage data can all be captured and displayed with these systems. Control of up to 3 bias sources is also possible.

The ES622 Python-based software offers a cleaner more user-friendly experience than the LabView-based ES620. The new software platform also allows for requested features and changes to be implemented with much quicker turnaround times.

The ES622 supports even more TLP rise times and pulse widths than before, and measures have been taken to offer greater output voltage accuracy. This new system also has faster test speeds compared to the older ES620. The ES622 supports more pulser types than the ES620, and the simpler software platform will allow for even more pulsers to be added in the future. TLP, vf-TLP, EOS, HBM, HMM, MM, EFT and surge are among the pulser types that will be supported by the ES622.

Device testing will be made even easier through automatic device probing, which will be offered after the first ES622 release.

A capacitively-coupled transmission line pulser, or CC-TLP, allows a user to generate CDM-like pulses with greater control and repeatability than standard JS-002 CDM testers, and it is done so with a vf-TLP rather than a CDM tester. A CC-TLP probe fixture and a vf-TLP setup are all that is needed to study a device’s response to CDM stress. The typical vf-TLP pulse setting for this application is typically a pulse width and rise time of 1ns and 100ps, respectively.

ESDEMC Technology will soon be releasing its CC-TLP probing solution as an add-on to the existing vf-TLP solutions. Special software support will be included. The CC-TLP solution will eventually offer options of automatic calibration and device probing, which is the first on the market. Calibration and probing can also be performed manually using the tilt-adjustment knobs and the micropositioners to which the CC-TLP probing head easily mounts.

Below is a plot that shows a transient data comparison between ESDEMC’s CDM, RP-CCDM, and CCTLP.

ESDEMC is releasing a line of high voltage rise time filters with the HVRF-XN series. These filters are typically used to set the rise time in standard TLP measurements, but they may also be used in other low or high voltage pulse-shaping applications. The standard models offered by ESDEMC are the HVRF-10N, HVRF-10N, HVRF-20N, HVRF-50N, HVRF-100N, HVRF-200N, HVRF-500N, HVRF-1000N, and HVRF-1200N which correspond to rise time values of 10 ns, 20 ns, 50 ns, 100 ns, 200 ns, 500 ns, 1 μs, and 1.2 μs, respectively. Other rise time values may be made available upon request. All filters have 3 kV pulse handling and high reflection rejection.

Below is the frequency response of the HVAT-3K20-1G22E. It should be noted that ESDEMC can customize attenuation values. 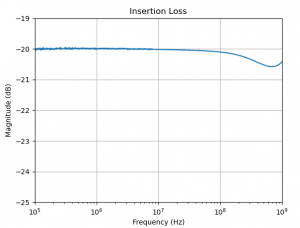 It should be noted that ESDEMC can customize current monitors to meet specific specifications.